It has been over thirty years with only the occasional brush with a soldering iron, and it was a pleasant surprise to arrive in Argyle House, Edinburgh, meet the Data Technology Team and see work-benches awash with electronics. The Team is responsible for various projects around Edinburgh, measuring everything from pollution to bat activity.

Their vocabulary was very different to that over in Moray House where we talked about aspects of learning, teaching, data and digital. They were talking sensors, LoRaWAN, data packets, payloads and all things IOT.  The collaboration between the Data Education in Schools Team and the Data Technology Team, to make an impact on learning, had begun.

IOT, What is that?

Ah yes, the Internet of Things. According to Wikipedia, it is a system of interrelated computing devices, mechanical and digital machines, objects, animals or people that are provided with unique identifiers (UIDs) and the ability to transfer data over a network without requiring human-to-human or human-to-computer interaction.

My task was to support them with IOT in Schools, an inspirational programme of delivering front-edge, innovative technology into the hands of our primary and secondary pupils, encouraging them to learn more about and have hands-on data.

The IOT in Schools project, working closely with the Data in Schools team will encourage schools to become involved in interdisciplinary projects, linked to the Scottish curriculum, collecting, processing and visualising data. 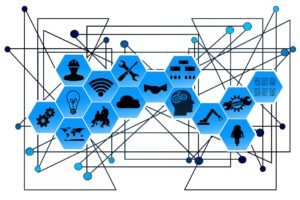 Some schools have already contributed to the Datatown activity, a 300 pupil pilot across three locations, where they identified the sensors they thought should be deployed throughout the fictitious town. It encouraged our learners to think about real-world issues and how to begin to solve them. Staff in Moray House and schools were impressed by the extent of the learners’ radical thinking on problem-solving around the climate challenge, for example.

The first phase of the IOT in Schools programme involved sensors and a gateway going into Newbattle High School for testing. Pupils studying Computing in S3 and Data Science NPA in S4/5/6 had some hands-on with the technology. The pilot has been running for six months, and the data flows from Newbattle, over the LoRaWAN to the University of Edinburgh data centre.

LoRaWAN, never heard of that? 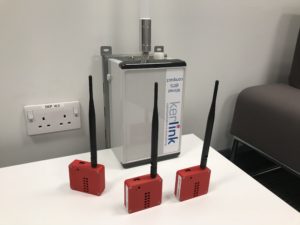 As an aside, LoRaWAN is a Long Range Wide Area Network and is a radio technology that is suitable to carrying sensor data, which is generally small in size, over long distances. The sensors use very little power and can often last for several years on a battery. The gateways are similarly low power, around the same as a mobile phone, and can receive data over significant distances — no doubt a simplification as many technical and environmental aspects affect the transmission and reception. But, in general, a technology that can transmit and receive small amounts of data over large distances.

Initial tests with lab-made sensors, measuring temperature, humidity, air pressure, movement and CO2, saw data coming back to the university via the gateway in Newbattle and also at East Bush, some 8km from the sensors. 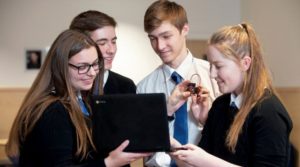 The next phase of the project will see up to 40 schools across south-east Scotland involved in environmental monitoring projects, primarily indoors to begin with but including the environment around the school after that.

The ambitious project eventually aims to offer sensor technology to over 500 schools. The Data Education in School team is developing learning resources which will support pupils to use the technology to solve problems in their local learning community. Schools in the Fife, West Lothian, City of Edinburgh, East Lothian, Midlothian and Scottish Borders are invited to express an interest to get involved.

Projects already proposed include climate and weather monitoring, monitoring of learning spaces, beehive, worm and pond activity, sea level, air quality in school car parks and soil moisture. The Team are already talking with technologists in Western Isles, Finland, Portland Maine, Boston and California to work jointly on some of the projects.