Book Review: You Look Like a Thing and I Love You

I’ve just finished the book You Look Like a Thing and I Love You (available in multiple formats from Amazon)  and it is hilarious! It’s written by Janelle Shane who has a PhD in electronic engineering and is author of the blog AI Weirdness. 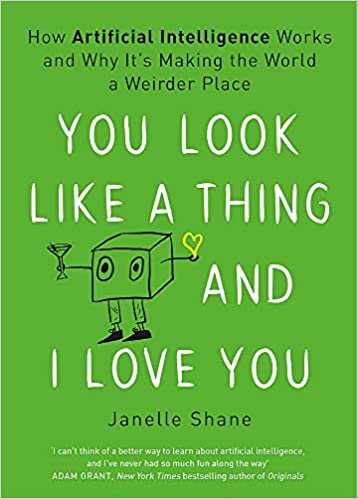 I love it because it is so refreshing. At work, I sometimes have to go to meetings where people put on their worried faces and spout about  “datification” and “algorithms” and how we’re all doomed. This book very quickly reminded me that we’re totally not doomed, or at least we have breathing space while the AIs faff around perfecting their cookie recipes. We’re more likely to be destroyed by AI stupidity than smart AI – “worrying about an AI takeover is like worrying about overcrowding on Mars” as Andrew Ng (the god of deep learning) puts it.

If you’re wondering about the title of the book, it’s a pick up line generated by an AI with about as many neurons as a worm. The AI was trained on a dataset of pick-up lines which the author collected from the dark recesses of the internet. It then was instructed to generate sentences with a similar pattern. “You must be a tringle? Cause you’re the only thing here” it said coyly among a whole slew of other surreal come-ons.

Don’t need any pick-up lines? Train your AI to generate paint colours, guinea pig names or Harry Potter novels. I would have been happy with a book full of lists of weirdness, to be honest, but the author has accomplished a lot more than making me laugh at the stupidity of algorithms. She also managed to write a very readable book which explains how some of the main techniques in machine learning work using amusing examples and hand drawn cartoons. She walks through recurrent neural networks, markov chains, random forests, genetic algorithms, generative adversarial networks, and reinforcement learning without the reader breaking a sweat. There are gleeful but useful descriptions of the myriad ways in which AI fails. At times the author sounds like an exasperated animal trainer.  The explanations are clear and maths free which is quite a feat given the technical details lying beneath. The book would be suitable for a keen upper high school student with a surreal sense of humour, or for adults without a technical background who want to learn more about AI. I particularly recommend it for arm-chair doomsayers.

There is a lot of hype about AI just now, both in terms of scare stories of the dangers or evangelising about business successes. One of the most valuable sections of the book is the set of questions to ask yourself if you’re trying to work out whether to believe a claim you read about a new AI product.

I leave you with an April Fool’s Day prank generated by a markov chain: “Make a toilet seat into pants and then ask your car to pee”. Happy Reading!