There are lots of changes happening in Scottish Education at the moment, including the Scottish Government’s plans to improve the Scottish Tech Ecosystem after the Logan Report. But what are young people’s views about how computing is taught in Scottish schools? How would they prefer to learn and how could we encourage more young people to study the subject?

Learners from the Young People’s Advisory Group in Computer Science joined Professor Judy Robertson on 29th March 2022 to answer these questions based on their survey results.

Watch the recording of the event 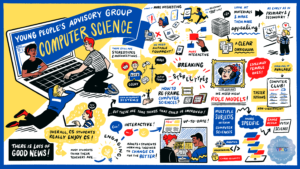 Professor Judy Robertson, together with learners from the Young People’s Advisory Group in Computer Science, have also produced a written report based on their research results.

The report presents the findings of a survey about secondary-school learners’ views of how computer science (CS) is taught in Scotland. The survey was designed, implemented, analysed and presented by young people in the Computer Science Young People’s Advisory Group with assistance from staff and students at the University of Edinburgh.