The Unsung Hero award (sponsored by XDesign) recognises someone who is selfless with their time and/or knowledge, who gives back to the community though isn’t usually recognised for their work. 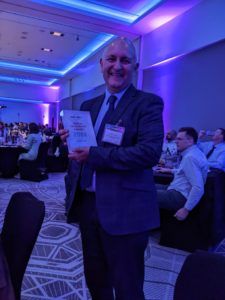 Tommy has advised on the digital learning requirements for over twenty new build schools in Midlothian, including the flagship Newbattle Digital Centre of Excellence. He has contributed to national qualifications such as the National Progress Award in Data Science. He has supported countless teachers to develop their skills in digital learning, as well as student teachers at Moray House who are always inspired by his stories. He is eager to experiment with new technologies, such as green screen filming for language classes, or virtual reality headsets for teaching about the solar system. His infectious enthusiasm shines through in all his work and is especially apparent in the classroom where his encouraging and inspiring teaching is a joy to behold.  He is always approachable, generous and kind.

Tommy is known and respected in schools across the country. He was formerly a senior education officer for Midlothian Council. Before he became an education officer, he was a computing teacher and before that an engineer. Teachers and pupils alike love him because he is so kind and cheerful. He loves to meet new people and share ideas. He gives people confidence to try new things, which is very important in an educator who works with technology innovation. Tommy is a rare individual who has great breadth and depth of technical knowledge combined with the skills of a great communicator and educator.  He is an inspiration to all those of us lucky enough to spend time in his company.

ScotlandIS is a membership organisation for Scotland’s digital technology industry working with members and partners to grow the digital economy and support the wider digital transformation of business and society.