Sessions 3 and 4 assume that learners have been introduced to PPDAC – The Data Problem Solving Cycle.

This activity uses the following materials

Start with a class conversation about climate. What do learners understand climate to mean? What different types of climate do they know about? How does climate vary across the world?

Complete a short activity that helps learners match weather conditions to climate names. The correct definitions are shown below. This activity could be done in several ways:

Consider the local area around the school. What climate do the class think they live in and why? What features of our climate can they identify to justify their answer.

Move the discussion forward by asking learners to now think about what a microclimate might be and where we might find one.

The following pictures can be displayed and the learners asked whether they think it is a climate or microclimate. Have a discussion on the differences between a climate and microclimate ensuring learners understand that a microclimate defines the climate in a small enclosed area. 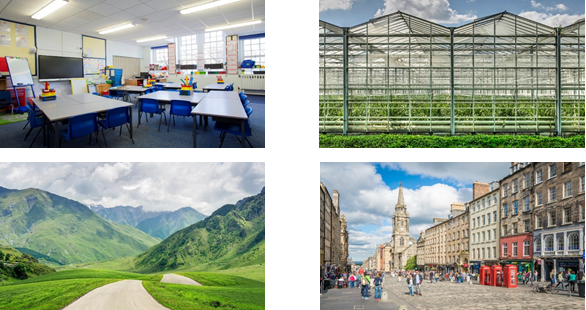 Design your own Microclimate

Working in small groups, learners design their own microclimate. They should consider:

At the end the session learners share their microclimate design and talk through their ideas.

A variable is a word used in science to describe something which can be changed. There are 2 main types of variables: independent and dependent.

Some examples that could help learners understand: 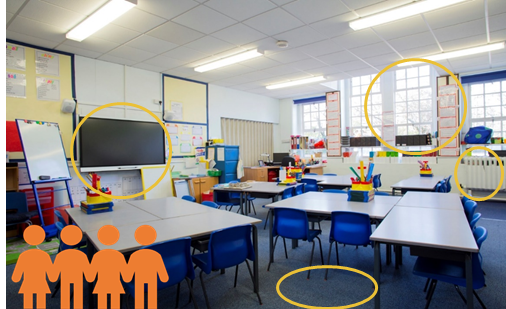 The image provides examples of things that can change the temperature in a classroom. Hold a plenary to share ideas and consider adding the pictures to a classroom display.

Now that the class know about climates, microclimates and variables, we are going to talk about how we can collect information (data) about our microclimates and how this data can help us identify the dependant and independent variables.

A sensor is a device that detects something and converts it into a signal or something you can and understand. Can the class think of any sensors? Encourage them to define what is detected and then what the signal is.

Here are some examples that can help get the discussion started:

Ideally the class can then visit different spaces inside and outside the school building to measure the temperature and note their findings. Things to consider include:

Each group should try and identify two different spaces where they want to measure the temperature. An example worksheet is available. Each group should try and draw the features of the place where they make their measurement. Encourage them to observe the environment, looking for things that might impact their measurements (e.g. they are looking for the independent variables)

Each pair or group should discuss the following questions and then share ideas with the class.

With learners now familiar with the use of a thermometer the opportunity exists to further their understanding of PPDAC – The Data Problem Solving Cycle.

This extended activity would take the form of a simple experiment and data collection exercise taking temperatures at different places within the school over the course of a few days or weeks and then working with the class to organise the data, present it and draw conclusions.  Session 1 would involve explaining PPDAC and designing their experiment (Problem and Plan steps). Data would be collected over an agreed time frame (1 to 2 weeks). The final session would include the analysis and conclusions step.

An example is shown below.

This step requires learners to identify a question they wish to answer. They question can be derived from the experiment they did in the previous section or they can come up with something else. Encourage questions with quantifiable answers (How much? Rather than Does x happen?). Example questions:

This step requires learners to plan what data they need and how they will collect it. This can be done in small groups or as a class. The output should be a data collection plan, for example.

The data step involves collecting and organising the data in accordance with the data collection plan. This step could be extended to encourage learners to understand other data sources, for example they may also choose to check the weather forecast, interpret maps or charts and add this information to their notes (this step should also be included in their data collection plan).

The learners now use the data they collected to understand what is happening around their school. Learners could be encouraged to create a bar chart of the temperature readings at one place over a week. They could create a chart to compare the temperature at different places at the same time each day. This step also presents an opportunity for learner to move the data into a spreadsheet tool and develop skills in creating a table of data. Lastly learners could use pictures to document any relationship they find between temperature and the other things they have noted down, for example wind or rain.

This final step requires learners to answer the question from the “problem step” based on the information they discovered in the “analysis” step. For first level learners this would involve trying to identify simple relationships. For example, the temperature in the playground increases between the morning and afternoon.

Adding the class charts, tables and drawings to a class display can also open up a conversation about data visualisation, how we display information.